Skip to content
Free Mobile Wallpapers Free Lightroom Presets Support me & get tutorials on Patreon
Before & after
macro.viewpointJanuary 24, 2021January 24, 2021

It has been a while (3 months to be exact) since I published my last before and after editing blog post. I have shared quite a lot of photos during that time. And a lot of them have went through quite some editing to get to the photo you see in my gallery. I’ve collected 10 photos whose edits (and comparison of the before and after) would surprise you the most. And I’m here to show them to you.

But before I do, here’s a little something about editing that came to my mind recently:

The goal of a photographer is to be able to see a potential final frame in the wild even before you take the shot. Even though the original might seem quite like any other ordinary photo, editing often is what brings out the beauty of that frame.

Of course, unedited photos and photos with just a little bit of editing look great too. But that’s not what I’m here to present. Here you will see how an ordinary frame can be turned into something that will make you say “Wow”. And I’ll mention what I did and which apps I used for each edit. So you can learn and try something similar sometime too!

You can use the slider to reveal the before and after of each of these photos. The photos are interactive so that you would be able to compare the photos more easily! Let my edits inspire you to try something similar in Adobe Lightroom, Photoshop and PicsArt. Visit my Instagram for all of these photos already posted.

These (if I’m not mistaken) plum blossoms were captured last Spring. I altered the tones in Lightroom to make the background bokeh more red. Then I brightened the blossoms and desaturate their color. Then, using PicsArt application, I added some bokeh. The one applied here is available in the app through Mask -> Bokeh. In the end I applied some of my own overlays from the stickers menu. The result looks like something in between Winter and Spring.
If you haven’t seen my blog post about how to add snow into your photos, tap here to read it. It is fairly similar to adding bokeh.

The next photo to show you is this pair of Autumn crocuses. They just looked way better in blue (which is the theme that I posted them in). I edited the photo in Adobe Lightroom for all the color change. Afterwards in Lens Distortions I added the sunshine in the top right corner. Finally I added some color overlays in PicsArt to make it seem that there were more flowers in the foreground and background.

This was the day I almost didn’t leave the house, because I didn’t think there was any frost over here. Boy I was wrong – I captured so many frosty photos this day!

For this edit firstly I focus stacked the photo from 6 individual differently focused photos using Adobe Photoshop. If you don’t know what focus stacking is or how to do it, tap here to read my tutorial. As the result I acquired a focus stacked JPEG photo with focus throughout the whole branch. The frame also expanded, which I got from stacking 6 different photos. Then I edited the photo in Adobe Lightroom. In the end I added some snowfall effect in PicsArt and Lens Distortions.

I saw the potential in this photo even though it was gray, brown and boring. Firstly I expanded the frame using Adobe photoshop since I couldn’t fit it in 4:5 aspect ratio without zooming in too much. I plan to create a blog post describing how to do that + some other photo enhancing techniques, so stay tuned. I acquired the colorful background in Lightroom using selective editing. This exact edit I did is available as one of the Lightroom presets in my Winter preset pack! Feel free to view demos of all the presets and message me on Instagram if you want to purchase them. In the end I added some snowfall effect using PicsArt and Lens Distortions.

My favorite topic this winter. Frozen soap bubbles! This was the first bubble that I got to freeze. Although weakly noticeable in the original, it had a beautiful freezing pattern. I went out right when the Sun decided to leave the horizon and stopped shining direct light into the bubble or scenery. I thought the results would be meh as the photo in my camera looked so washed out and..gray. But how I was wrong when I started editing.

When I applied one of my Winter presets in Adobe Lightroom, the whole world of this picture changed. It gained beautiful orange background from the selective editing in the preset. As well as the center of the subject gained clarity and detail. And the whole frame gained that cold-blue winter tone. I added some more orange warm tone inside of the bubble to make it seem like there was a beautiful sunset behind me. Did I trick you? 😉 In the end I added some bokeh on the top part of the photo and snowfall effect using PicsArt.

These daisies had been sitting in my already-edited-but-not-yet-posted collection since Summer. I edited them in blue and green tones in Lightroom and was happy with the result. Until it was time to post the photo some 6 months later and it just didn’t feel good enough anymore. So I edited it some more. Not re-edited, but double-edited. That’s a thing I practice sometimes to apply settings on a photo with no settings interfering from my previous edits. I added some colors in the background, enhanced the tones of the center of the daisies and made the colors a little bit pastel-like.

That one time when I saw bees with blue pollen, and got a sharp photo with a bee mid-air. Unfortunately there were a lot of distracting elements in the frame. But that didn’t stop me from editing them all out. The original frame is much wider, have a look.

This tiny mushroom capture was photographed during one of my Autumn walks on a sunny day after multiple rainy days. I edited the photo in Adobe Lightroom to add the warm golden tone in the greens as if the Sun was shining inside the frame. The edit also brightened the overall photo and changed the tone of the sky. After the edit in Lightroom I expanded the whole frame in Adobe Photoshop. I did it because I did not want the mushroom to be centered in the frame. In the end I added some bokeh overlays using PicsArt. The overlays I used here are my own downloaded ones, and were applied through PicsArt’s sticker option.

Another bubble capture, but this one was my first ever attempt at capturing freezing bubbles. And they did not freeze yet. But that didn’t stop me from acquiring a photo that is still post-worthy. I toned the photo to cold tones using Adobe Lightroom. I also added some clarity and pop to the bubble so that it would stand out more. Afterwards I edited the photo in PicsArt and added some bokeh overlays that I have downloaded myself. As you can see I also added some snowfall effect using PicsArt application.

To finish this post with something epic, I have this photo that, as I’m writing this post, I posted just yesterday. It did really well and is my third most liked post ever. So why not show the original and tell you what I’ve done here through every step? Here we go.

Breakdown of the Cosmos flower edit: Before and after of each step of the editing

This is the original photo. I cropped in quite a lot to have the two flower heads fill most of the frame.

Firstly I edited the photo in Adobe Lightroom. I acquired more orange and brown tones and got rid of most of the green tones. I also cloned off some distracting parts of the photo such as the flower on the right side.

Then I started the big process in Adobe Photoshop. This actually was the first time of me trying such technique. First of all, I worked with photo and elements being as a smart object. And I applied the edits on specific parts of the photo using a mask. I did that not to lose the original in case I decide to use a differently toned photo from Lightroom.

The first thing I did was remove more distractions from the photo (mostly petals). I also brightened up some parts of the petals to add more depth and 3D feel.

Next I applied gaussian blur to the background of the photo. I did it multiple times to apply a smaller amount near the flower heads and larger amount – elsewhere.

The next part was creating the effect as if there were some flowers in the foreground of the photo. The top-right is created by simply drawing it with a white brush on the softest setting. But others were created using the photo exported from Lightroom. I deleted the surroundings of a flower using eraser and placed the flower where I wanted it. Then I blurred it to have it look as it was in the foreground.

The final touch was added on my phone using PicsArt. You could also do the same in Photoshop. I added an overlay on parts of the photo. The photo I used was a starry sunset sky capture. I desaturated and darkened the sky enough so that the only part visible from it were the stars.

Did I choose impressive enough edits to showcase in this blog post? Feel free to leave some feedback. Send me a message on Instagram or write a comment under this blog post. I love hearing feedback from users, because it encourages me to write more such posts and do them more often 🙂 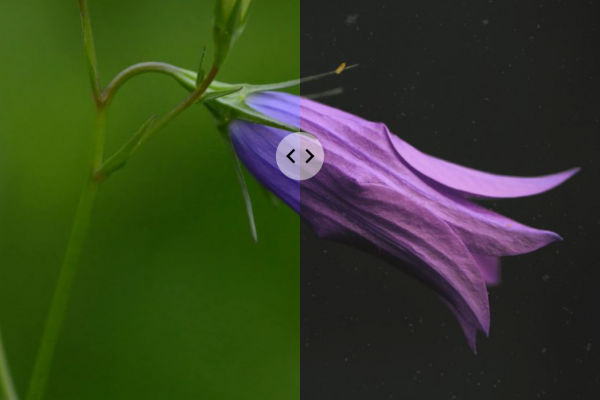